New Haven’s Finest to the Harpooners 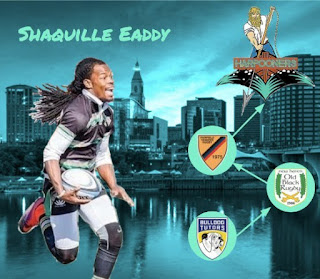 Hartford Harpooners are in for a treat. @thereal.dbu Shaquille Eaddy is suiting up for the Harpooners. Shaq is a versatile player that has come a long way since starting his rugby career with the @bulldogrugby Shaq hailing from the city of New Haven came in as a crossover athlete having played many traditional American sports. Shaq is a competitor and always brings the heat and can carry a chip on his shoulder known for his quick thinking,speed, and freakish athletic ability you won’t want to sleep on him as he has a killer instinct. You’ll find Shaq being capable of playing anywhere in the backfield but fancies himself as a fullback due to his ability to lead a defense and ability to counter attack if the opposition kicks it his way, stay tuned as Shaq looks to do some big things for the #hartfordharpooners #ManifestingLegendaryRuggers 😏