Harpooners have picked up a local prospect who has a goal to make the MLR and we are excited to be able to support his vision by providing a pathway for him as we both have a goal to attain the same vision. Darrin Fernandez is smooth operator when on the field once the whistle blows Darrin moves job to job always re-centering himself so that he can perform at each task at hand. He is a speedy back who has crisp skills and loves to find himself in the try zone. He started his rugby playing career playing U-18 with Fairfield Rugby before moving on to college to represent AIC. With the goal of making the MLR, he knew he couldn’t just play college rugby and was encouraged to play mens level rugby representing his local club team Fairfield Yankees. With those experiences, he was picked up by the Dominican National Team competing in Sevens Tournaments. He’s represent select side teams from Rekavary to the Northeast Academy from there he made his way into the U-23 Rugby United New York team. If he keeps up the hard work and continues to grow as an individual his trajectory points him in landing a contract in the not so distant future with Major League Rugby. We are excited to see him land that contract while representing the #HartfordHarpooners where we look at #manifestinglegendaryruggers 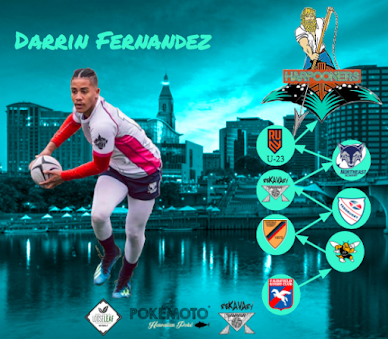